Last weekend I attended the annual LDStorymakers Writers Conference. I’ve attended five of them over the past six years. Last year I had a small baby, so I didn’t go, and I was excited to return this year. I learned a lot over the course of two days and enjoyed making new friends and spending time with old friends. But the highlight of the weekend, for me, was attending the Whitney Gala on Saturday night.

The Rules in Rome was a finalist in the historical fiction category, along with Doing No Harm by Carla Kelly, The Moses Chronicles: Bondage by H.B. Moore, A Hope Remembered by Stacy Henrie, and Light of the Candle by Carol Pratt Bradley. Frankly, I was thrilled to be a finalist. I’ve had two finalists previous to this (Espionage in 2012 and Deadly Alliance in 2014), but I don’t consider myself a certainty when the finalists are announced each year.

Shanda Cottam and Julie Wright presented the award for the Historical category. That was fun, because I know them both. Shanda is a blogger at LDS Women’s Book Review and Julie Wright is an accomplished author and past Whitney Winner. They highlighted the five books and then opened the sealed envelope and read, “The 2015 winner for best Historical is The Rules in Rome by A.L. Sowards.”

When that happened, I leaned over to my husband and asked if I’d heard correctly. He assured me I had. So I walked up to the front, received hugs from Shanda and Julie, and then they left. 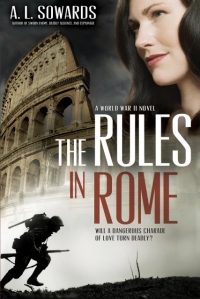 And then I was in front of the microphone. I’m a writer. I like to put my thoughts down, stew over them, and then go back and revise a few times. I’m not a public speaker. If I do a great deal of preparation, I can make presentations, even in front of large audiences, but I didn’t think I’d win. And prior to winning, I’d thought it would be kind of pompous to prepare a speech. But standing there, looking out across the audience, I realized I’d been wrong. The people in front of me had paid good money for their under-cooked steak, and they wanted to be inspired and uplifted and hear something memorable from the winning authors. And by not preparing, I let them down.

So I apologize to everyone in attendance. I had the opportunity to say something meaningful, and I wasn’t prepared. I don’t think I did a horrible job, but I could have done better.

My husband recorded my speech, and at least one person said they wished they could hear it, so I’ve transcribed it below, and added a few comments to clarify and flesh out some of my thoughts. (Black is original. Blue is added.)

“Before the dinner I ran into Karlene and she asked if I had a speech prepared. I should have listened to her. (Karlene is a blogger at New LDS Fiction and she read all twenty-five books in the adult categories and most of the books in the youth categories, so it would have been smart to take her hint.)

“I’d like to thank the Whitney committee and the Whitney program. I have to admit that there was a time in my life when I thought that LDS fiction was not as high-quality as other fiction was. (I read a few books I didn’t like and listened to too many college-student critics.) And Annette’s probably out here somewhere, cringing. I don’t see her, but I’m sure she’s here somewhere. (Annette Lyon is passionate about the Whitney program and was last year’s president. I’ve heard her express frustration when people lump all of LDS fiction together and declare it sub-par. As she should. How many people read one bad book published by Scholastic and think everything else Scholastic publishes must be awful? Almost never, yet it happens to Covenant and Deseret Book all the time.)

But then I had a few experiences and read a few books that changed my mind. And I also came to the conclusion that readers shouldn’t have to choose between high-quality writing and a wholesome story. And I appreciate the Whitney Awards for encouraging high-quality writing among a group of people that generally write cleaner fiction. (Then I said something I couldn’t pick out, probably punctuated by a few umms and uhs.)

“Can you guys hear the music back there? (Another group was meeting in the Marriott at the same time, and their music was very audible in our room.) I was kind of hoping they would start playing “Lili Marlene.” They’re playing some oldies, but not that old. (Lili Marlene was probably the most popular song of WWII, and it played a role in my novel.)

“This is really exciting. I kind of don’t really believe it’s real yet, but maybe tomorrow. Thank you all so much.”

Then I sat down. And I forgot a few things, so I’ll add them here.

I forgot to thank my amazing editor, Samantha Millburn. We’ve edited five books together (I hope it will be six by the end of the year). The Rules in Rome was number four for us. I have learned so much from her and I’m grateful for all she’s taught me about writing.

Others deserve thanks too: others from my publisher, including Kathy Gordan and Stephanie Lacy, who were in attendance. My good friends Terri Ferran and Linda White, who helped so much with The Rules in Rome, other test readers, and my family.

My speech wasn’t a total loss. I got a few laughs about “Lili Marlene.” And an awesome gal named Chelsea Hales tweeted part of it: “We shouldn’t have to choose between high quality writing and wholesome stories. @ALSowards Bravo! #WhitneyAwards.” I’m quite content if that’s the most-remembered thing from my time behind the microphone.

So I won. Kind of crazy. I came home from the conference on Friday feeling very small and obscure and insignificant. I came home Saturday full of gratitude and surprise. I still have feelings of inadequacy as a writer, and I’m sure I always will. This writing thing is a bit of an emotional roller-coaster. But I love creating characters and stories out of what starts as a blank document. I love sharing those stories with others. And I’m incredibly grateful that others found one of my novels worthy of a Whitney Award.

At the beginning of the night they had all the finalists come up onto the stage (we need a bigger stage). I’m at the left in a coral dress.

With Josi S. Kilpack, who won the Best Romance and Best Novel awards, and with Shanda Cottam, who helped present the historical award.

I didn’t get a picture with Julie Wright, who helped present the historical fiction award, but I have this picture with her from the 2012 awards night, so I’m re-posting it. 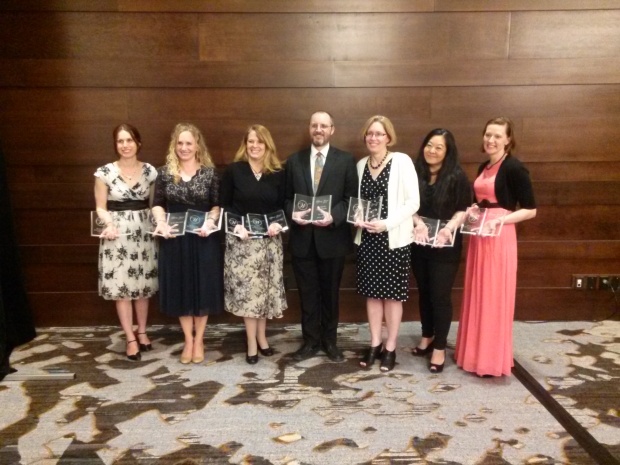 With some of the other award winners. Tara C. Allred (General Fiction, THE OTHER SIDE OF QUIET), Josi S. Kilpack (Romance and Best Novel, LORD FENTON’S FOLLY), Jennifer A. Nielsen (Best Middle Grade Novel and Best Novel for Youth, A NIGHT DIVIDED), Dan Wells (Speculative Fiction, THE DEVIL’S ONLY FRIEND), Traci Hunter Abramson (Mystery/Suspense, FAILSAFE), Valynne E. Maetani (Best Novel by a New Author, INK AND ASHES), and me (Historical Fiction, THE RULES IN ROME). Not pictured: Brandon Sanderson (YA Speculative, FIREFIGHT), and Martine Leavett (YA General Fiction, CALVIN).

With Traci Hunter Abramson, who won her third Whitney for best mystery/suspense. 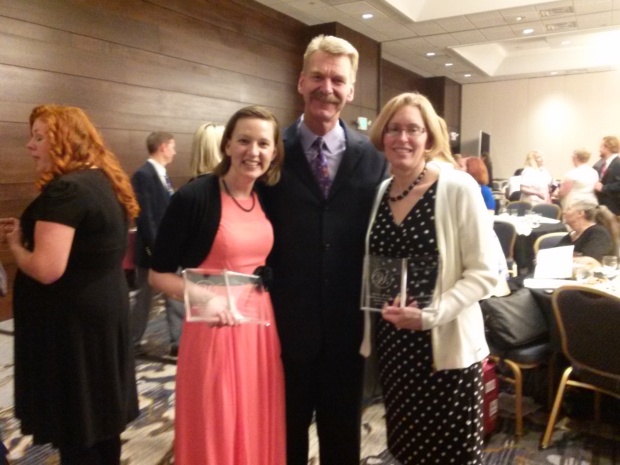 With my husband. I couldn’t be a writer without his support!