The 69th Anniversary of D-day

Last year I posted some pictures my sister took of the WWII memorial in Washington DC. Now that another anniversary of D-day has rolled around, I thought I’d post those pictures and captions again. 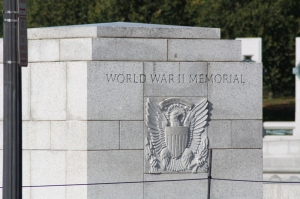 “We don’t build memorials to war – we build memorials to those who fight wars, to the millions who wear their country’s uniform, to the even greater numbers on the home front who support them with their labor and their love, and to the precious freedom we fight to preserve.
“War represents the ultimate failure of mankind. Yet it also summons the greatest qualities of which human beings are capable: courage beyond measure, loyalty beyond words, sacrifice and ingenuity, and endurance beyond imagining.” Bob Dole

The memorial was built to honor “the 16 million who served in the armed forces of the U.S. during World War II, the more than 400,000 who died, and the millions who supported the war effort from home… Above all, the memorial stands as a symbol of American national unity, a timeless reminder of the moral strength and awesome power of a free people united and bonded together in a common and just cause.”

The field of stars represent Americans killed during the war, with each star representing 100 deaths. There are 4048 stars. 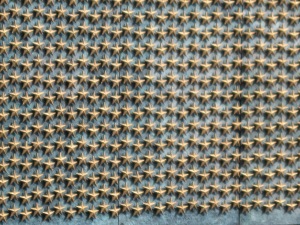 “Here we mark the price of freedom” 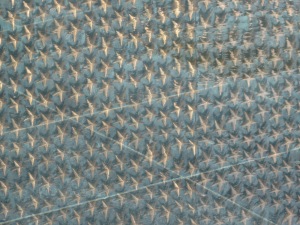 During the war, you could see banners hanging in the homes of many Americans. On the banners were stars to represent family members in the service: blue for those living, gold for those who had died. 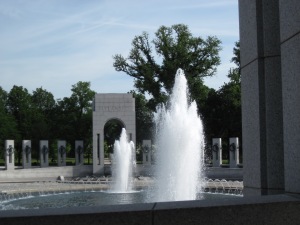 to reprepresent the Atlantic Theater

and the Pacific Theater.

Inside the arches are sculptures of eagles holding up wreathes. 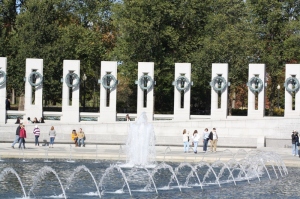 Surrounding the memorial are 56 columns. 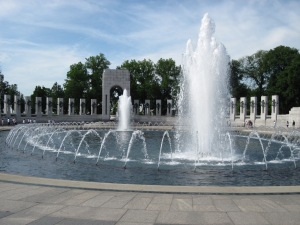 The 56 columns represent the 56 US states and territories involved in the war.

The pillars are joined with sculpted rope to show unity.

depicting scenes from both theaters and from the homefront.

“Our debt to the heroic men and valiant women in the service of our country can never be repaid. They have earned our undying gratitude. America will never forget their sacrifice.” President Harry S. Truman

I also want to say thank you to all who served during WWII or during other conflicts, and to those who serve our country now. Included in this list is my late grandpa, who was training to be navy pilot during WWII, and my little brother, who leaves for Afghanistan this month. Today, and every day, is a good day to pray for our troops!

7 thoughts on “The 69th Anniversary of D-day”