An Allied special-ops team monitoring Hitler’s largest supply of oil finds the traitor in their midst, but by then, a Fascist agent is the least of their problems. 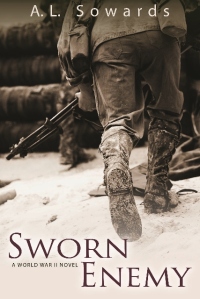 June 1944: As World War II rages, the people of Eastern Europe are hopelessly trapped between two formidable forces: Hitler’s Germany and Stalin’s Soviet Union. In their midst, a band of heroes prepares for the changes the coming battles will bring.

After narrowly escaping her Nazi captors, French Resistance worker Genevieve Olivier has fled to Allied territory with the help of American Lieutenant Peter Eddy. Their connection is undeniable, forged in the crucible of danger. But despite their blossoming feelings for each other, they must both finish the work they began . . .

In the safety of England, Genevieve hopes to find purpose as a nurse—all the while unaware that the Gestapo still seeks the woman who slipped through their grasp. When she is called upon to resume a life of danger as a French spy, will her desire to prove herself be her downfall?

Recruited by an elite special-ops team intent on thwarting the Nazis, Peter finds himself engaged in a personal battle as well—there is a traitor among his comrades. Deep in the Carpathian Mountains, Peter combats an unknown foe. The stakes are high as he fights to save the lives of his teammates.

They are miles apart, yet as Genevieve and Peter fight for their own survival, they find a common well of strength in their faith—and their determination to be reunited.

Available in most LDS bookstores and several online retailers, including Amazon,

Book two of a three-book trilogy:

Here is the Sworn Enemy Pronunciation Guide. And Sworn Enemy Book Club Questions. You can request an Authorgraph here.

Would you like to try a sample? The first two chapters are on Amazon. More information on the book is available in these blog posts.

An entertaining tale of history, love and adventure that is taut and easy for readers to enjoy. . . A gripping and well-written story.
–The Deseret News

This book is SO GOOD! It pulls you in on page one and keeps you going as you fight, fear, love, and conquer right along with the characters.
–Shauna, I Love to Read and Review Books Blog

I loved the action and adventure in this book. I really loved Genevieve and Peter’s characters, no matter the obstacle, they are able to overcome all things. I loved the war details in this book . . . I didn’t want to put this book down!
–Cathy, My Book A Day Blog

The emphasis in Sworn Enemy is on the action and there’s plenty of that. The reader is shown the incredible risks undercover and resistance fighters took during World War II and the importance they placed on freedom and loyalty to their countries.
–Meridian Magazine