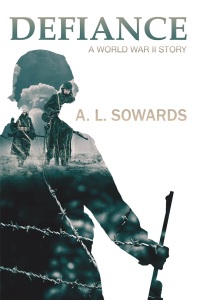 Today is the cover reveal for my next novel, Defiance. It’s been kind of hard for me not to post it all over the internet until today, so I’m glad I don’t have to keep it a secret anymore.

To celebrate, my publisher is giving away three copies of the book. Go to their Facebook page to enter.

Defiance is a stand-alone novel. But it does have a connection to The Rules in Rome, because Bastien Ley from The Rules in Rome and Lukas Ley from Defiance are brothers. You absolutely don’t have to read one novel to understand the other, but since they’re both great books, you should add both to your to-read list (not that I’m biased or anything).

Also, I’m having a few book signings where Defiance will be available (one of them is before the official release date–exciting, huh?).

Here’s what Defiance is about:

Eight years after immigrating to the United States, German-born Lukas Ley embodies the American dream: successful athlete, gorgeous girlfriend, loving family. But beneath the surface, eighteen-year-old Lukas is driven by ambition, resolved to avenge the murder of his father at the hands of the Nazi regime. Unfortunately, a failed physical throws his plans for flight school off course. Unlike his war-hero older brother, Lukas’s purpose is unclear. He can’t fly, and in the eyes of the military, he’s good for only one thing—the front lines.

From the foxholes of war-ravaged Luxembourg to the devastation of an enormous German offensive, Lukas’s journey is fraught with peril. But when he’s taken as a prisoner of war, he realizes life is about to get much worse. In the enemy camp, Lukas is viewed as a German fighting for the wrong side. Ripped from the innocence of an idealistic youth, he becomes a man beaten by the horrors of war. Now his only hope of survival is to hold tightly to his faith in God and his love of family and home. But even if he manages to make it out alive, can he ever be whole again?

2 thoughts on “Cover Reveal for Defiance”